Races three and four of the Porsche GB Boxster Resto Racing series came to the iconic Silverstone GP circuit on Saturday and it proved to be a day of mixed fortunes for the two Dick Lovett cars and their drivers.

The Fletcher Aviation and Classic Life inspired Boxster of Porsche Cardiff, driven by Stephen Brown, had been through an extensive re-building programme since its last outing and breakdown at Brands Hatch in May. It was clear, following on from testing in the week, that the Cardiff team had put together a credible and robust car for the pressures of the long and quick track at Silverstone. So, it was no surprise that in Saturday morning qualifying they produced times that would place them a brilliant third on the grid for race one.

Following on from their two, third place podium finishes at Brands Hatch, the Coca Cola inspired Porsche Swindon team was also hopeful and confident of moving forward in the placings at the weekend. Unfortunately, qualifying did not go to plan for them and with smoke appearing once the car reached 6000rpm, Ollie Coles took the correct decision to back off a little and ensure the car would be fine for the races later on.

A sensible mid grid position still gave him some hope and opportunity. The Swindon pit and support team worked hard pre-race in order to identify the cause of the issue and with some minor adjustments to oil levels they felt the car would hold up for the races, which proved to be the case. 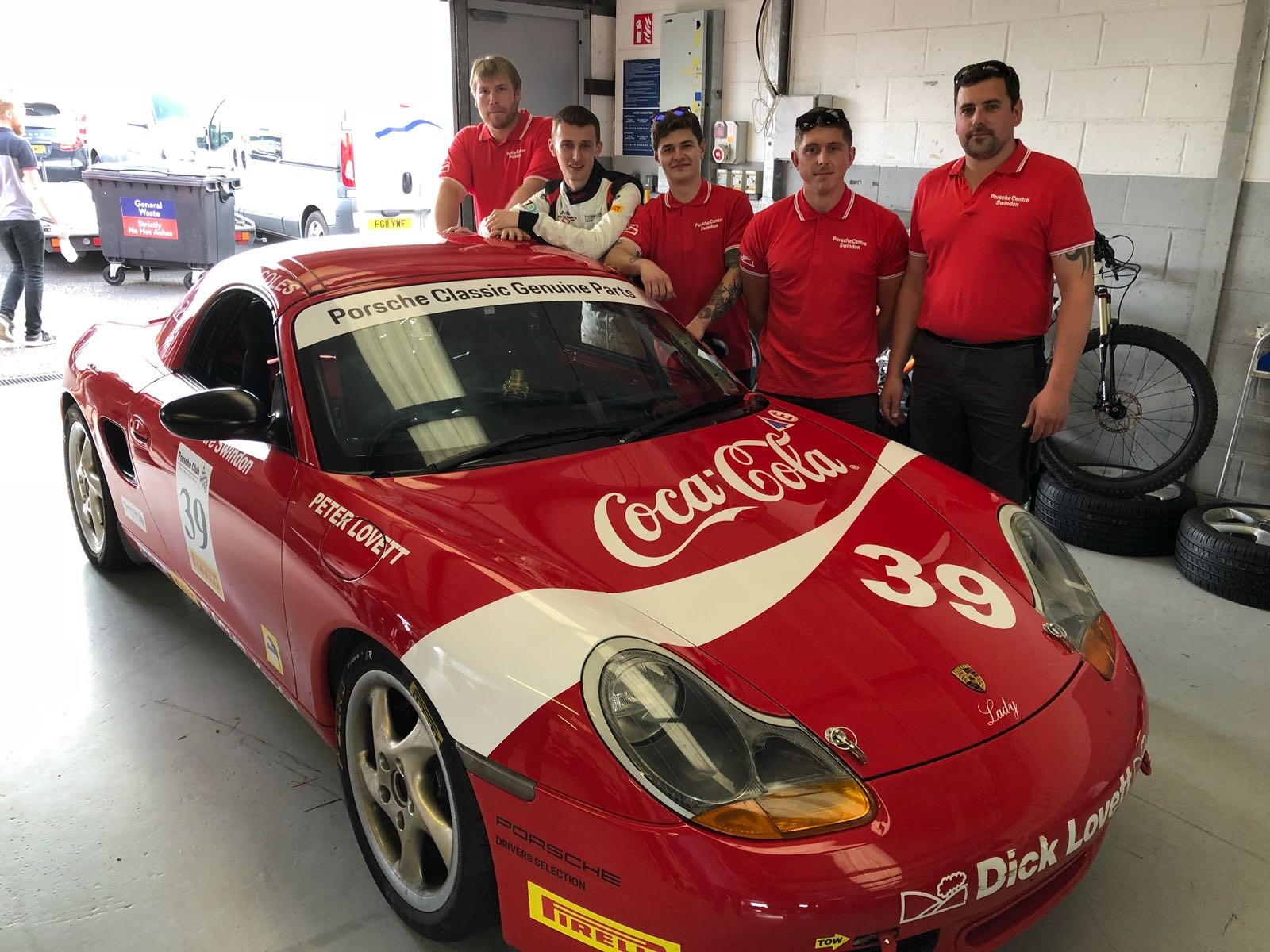 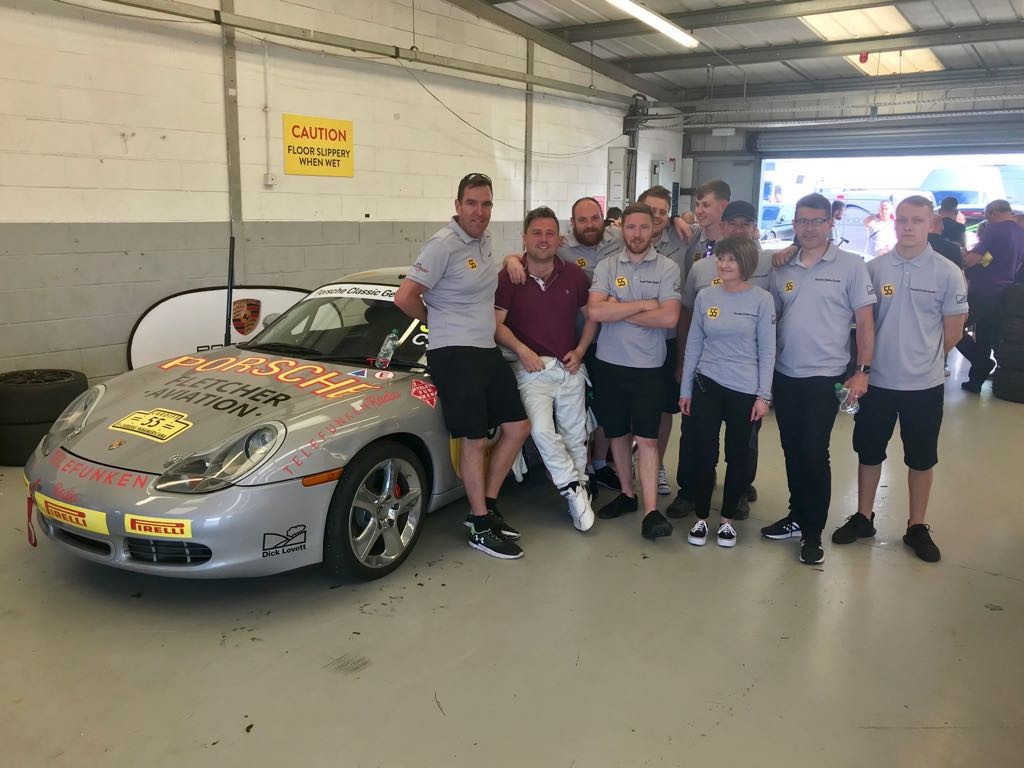 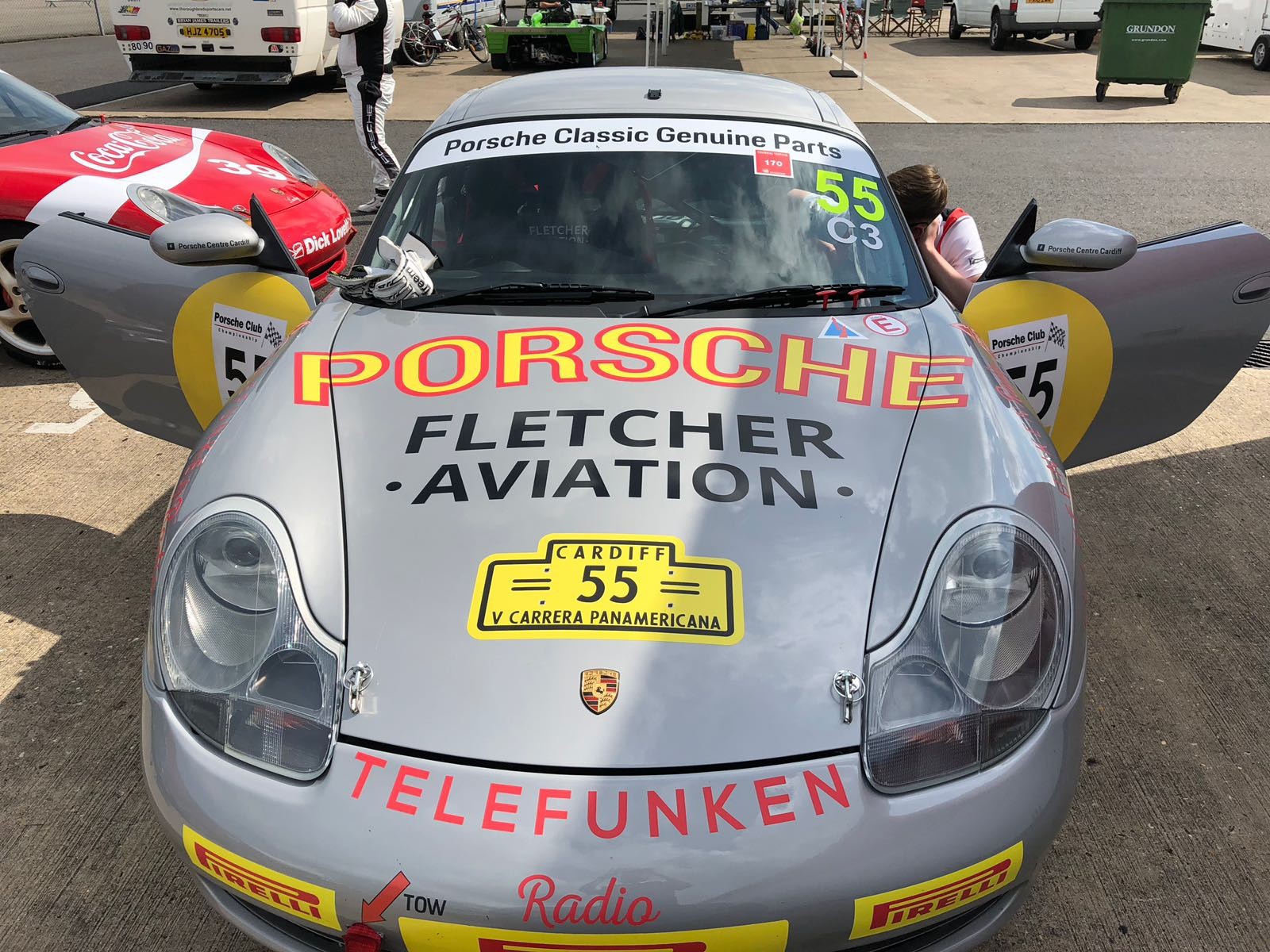 So on to race one and both Dick Lovett cars were off to positive starts in the allotted 20 minute race. The Porsche Bournemouth car of Ben Mcloughlin was again setting the pace and his occupation as a professional driver again excluded him from the series, as it did in the previous rounds. With him chasing down the back markers of the main Porsche Club championship, the race was on with all the remaining official Porsche centres for their class podium finishes. Stephen Brown’s Cardiff car was fully in the mix of the front runners and was pushing hard alongside the ‘Pink Pig’ of Wolverhampton and the ‘Wally Jeans’ car of Bolton.

Ollie Coles was travelling well and up to fifth. With the car now travelling positively he was making ground on the leaders in the humid midday conditions.

However, 10 minutes into the race there was some drama involving the club championship cars up front; a 911 engine decided to leak oil all over the track at Becketts which proved hazardous for some of the cars behind. Ollie Coles, with no knowledge of what had happened in front of him, skidded off and lost both valuable time, his placing and ground on the rest of the pack. After this he has unable to regain ground and a respectable seventh position was gained for his efforts.

Fortunately for Stephen Brown, he managed to avoid the slippery area and maintain his momentum. With the car in fine fettle and some bold driving, to hold off the aggressive challenges of the Pink Pig, he secured a fantastic second place and some credible points and plaudits for the team.

DISASTER AND MISFORTUNE FOR BOTH DRIVERS

So, on to race 2 later that afternoon and with the sun now out in full force, it was going to be a test for all the drivers on the grid. Both cars started in similar positions to Race One and again Stephen Brown was off to a flyer in his authentic looking silver car, looking strong in third position. The striking red and white livery of the Swindon car was again making positive progress through the early stages and gaining momentum on the cars in front.

With driver confidence high and the desire to gain valuable points in the last outing of the day, it was clear to see that all the cars seemed to be pushing harder than race one, including the drivers and cars of the main Club championship and before long these class leaders of their race, with their more powerful engines and slick tyres, were bearing down on the Boxsters. As the race went on towards its later stages disaster and misfortune came in to play full force for both Dick Lovett drivers.

It was clearly not going to be Ollie Coles’ day in the Swindon car as an unexplained loss of total power on one of the straights brought the car to a stop. A simple return to neutral and with a turn of the key the car powered back to life and was back up and running but, as in Race One, this unplanned few moments off the tarmac proved to be our downfall for the weekend, so from a credible and promising fifth position he was back to eighth and a long way back with too much ground to make up in the remaining time. In the end, another seventh place finish capped-off a frustrating day for the young driver with some work to be done on the car by the Swindon support team to check its reliability over the coming weeks. 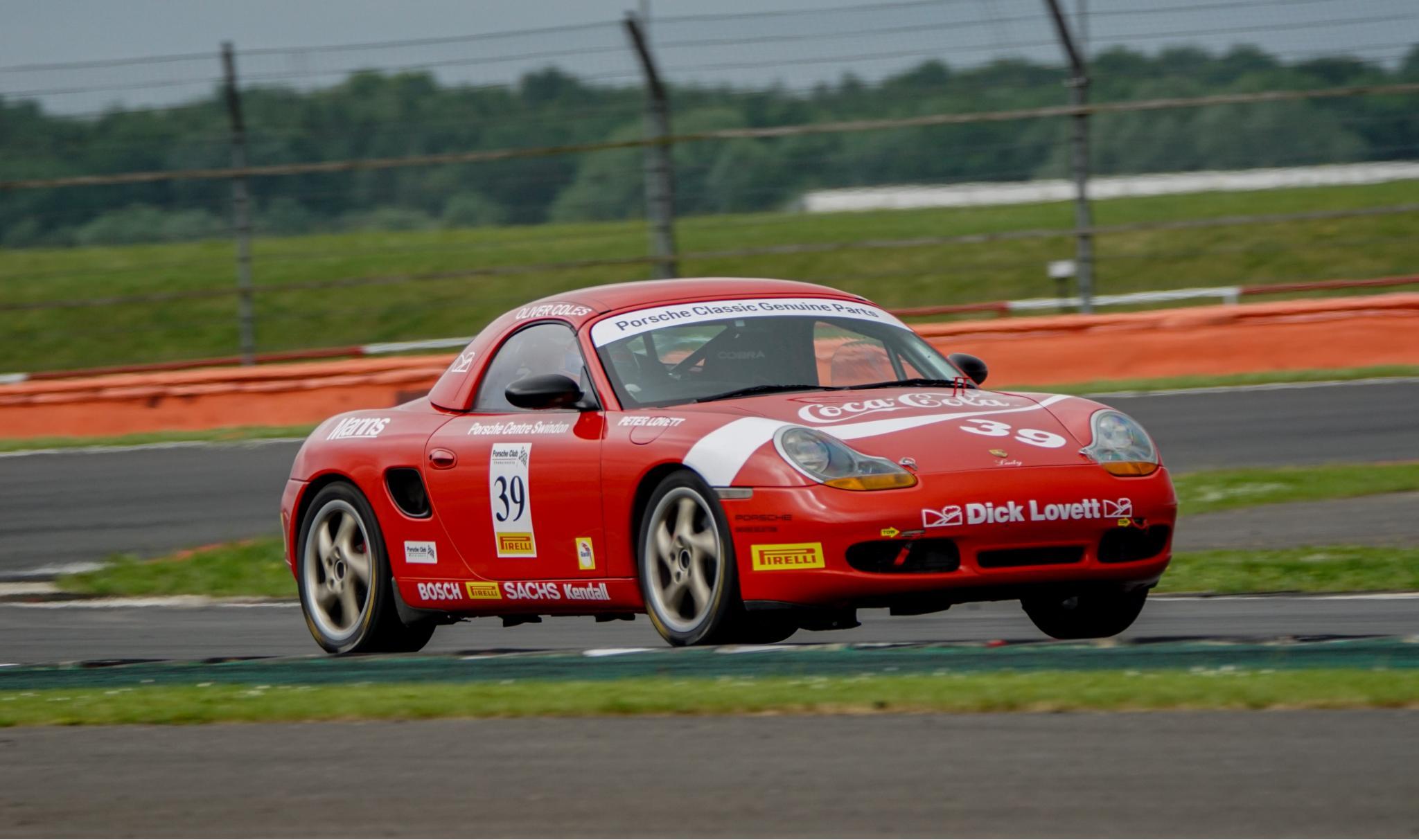 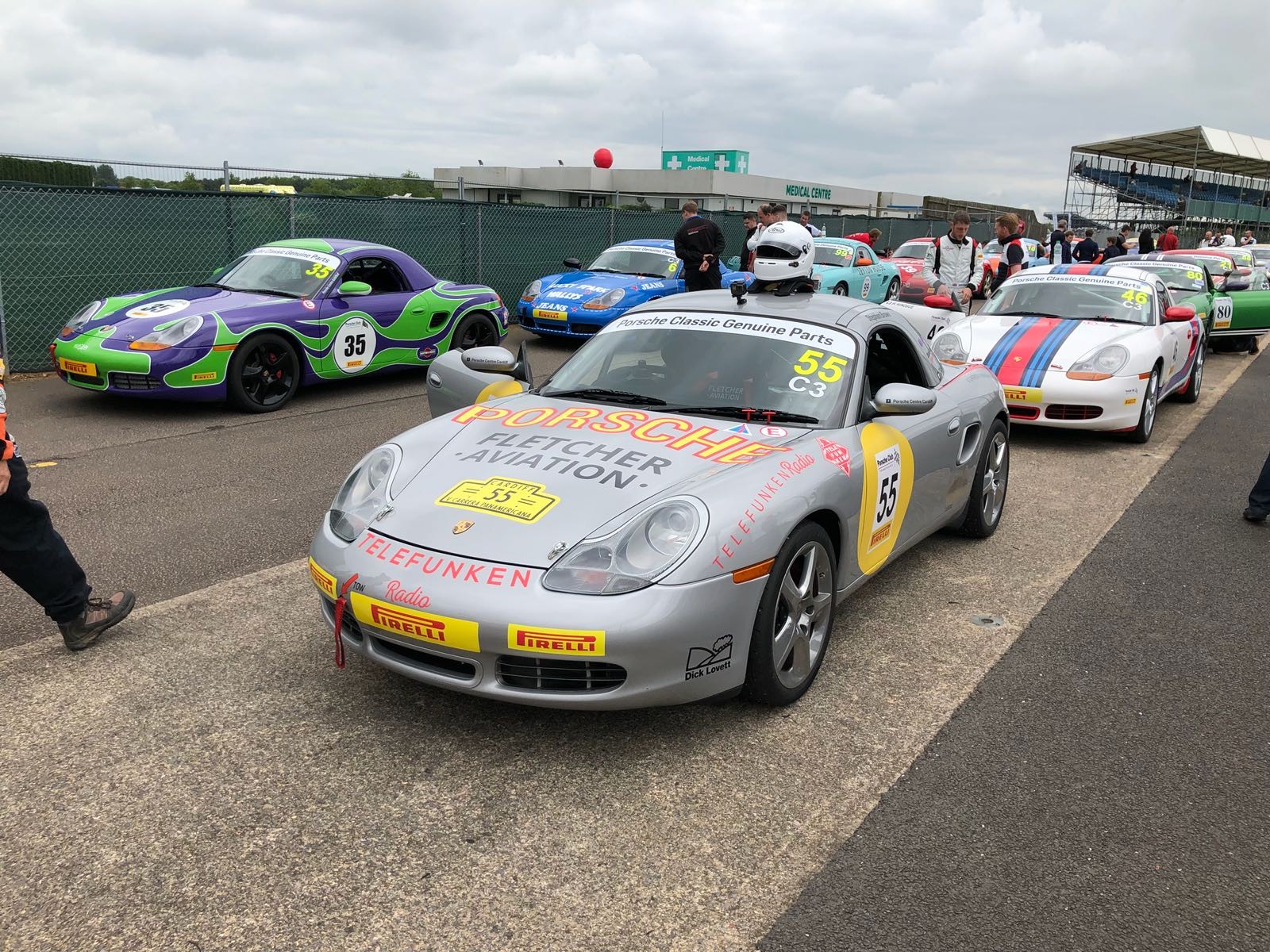 Unfortunately, for Porsche Cardiff and their Fletcher Aviation Classic Life car they were to be involved in the biggest drama of the whole event and possibly the series so far.

With only a few minutes left on the clock, Stephen had consolidated himself into a strong third place and with his lap times reducing, he was gaining good ground on the two cars in front of him and looked well placed for a final push and challenge on their lead. As he travelled confidently down the Wellington straight towards Brooklands he found himself being pressured by the leading two cars of the Class 1 Club championship. The 911 and Cayman jostled each other for position and with Stephen holding his rightful line, he was lucky not to be wiped out from behind by the 911 with inches to spare. With the 911 losing its shape and position to his challenger he went wide. In an act of desperation he tried to regain his position from off the grass for the right hander in to Luffield, but instead collided with Stephen’s offside and in doing so spun the Boxster into the challenging Cayman, forcing them both to collide and spin off the track to end their races.

It was a disappointing end to the day for the whole team and once the car was returned to the pit lane it was evident to see from the damage what can be done when cars collide at speed and how brave these amateur drivers are. Thankfully Stephen was okay and the roll cage and safety protection equipment in the car and on the driver did its job brilliantly.

As the after race presentations were held the 911 driver was still in discussions with the clerk of the course and Stephen was able to collect his trophy for Race One and celebrate with the team from Cardiff.

All in all another very successful event for the teams on the grid and their drivers and we all now look forward to the ‘Festival of Porsche’ on September 2nd at Brands Hatch where we find the Boxsters going head to head on the Indy circuit in their own independent race against each other…..thankfully not a 911 or Cayman in sight!

Get in Touch With Dick Lovett Today