What do you do for a living? An analysis of a TikTok Phenomenon

Daniel Mac on TikTok has accumulated over 12 million followers since his first posting in September 2020 by creating videos asking supercar owners what they do for a living.

The young star, @itsdanielmac on TikTok has now produced over 100 videos talking to people from all different professions, from lawyers to social media stars. We have analysed each of the videos Daniel has uploaded to find out the most popular cars that people are choosing to buy and what professions put you in good stead to purchase one of these luxury cars.

Altogether from over 100 videos, Daniel spoke to 291 car owners ranging from a Volkswagen Bus to a $6 million Porsche 550 Spyder and everything in between. While there were over 100 different professions mentioned, some people just didn’t want to disclose how they made their money or purchased their luxury car. Daniel tries to gather as much insight from his videos by talking to people from all backgrounds and locations, interestingly under 20% of the car owners in the videos were female.

The most popular make of car

Coming in at the top spot for the most popular brand is the remarkable Lamborghini, with prices ranging from £80,000 to over £1million, these cars are a rare sight and with their impressive design they certainly stand out. This is closely followed by Ferrari and McLaren, the supercars that are likely to resonate the most with people. Surprisingly, however, more common brands such as BMW and Ford made it into the top 15 and more traditional, classic cars were of course featured in the top 10 with Aston Martin and Bentley. Daniel Mac’s videos show there is a clear interest in the flashier supercars such as Ferrari, Lamborghini and Mclaren as they made up nearly half (46%) of the whole list of people interviewed.

The most popular make of car for men was the Lamborghini while women opted for Porsche as their number one choice. The Lamborghini is a choice that is less common in the UK and only 2,142 new Lamborghinis were sold across Europe in 2021 compared to Porsche’s European sales at 86,160. 40% of the Porsche sales were electric or hybrid and as demand grows for more eco-friendly cars, Porsche has a real offering in this space. Does this mean Lamborghini is soon to follow? The brand has concept cars such as the Terzo Millennio which could provide a luxury option to the greener supercar owners but at a much higher price point, the market is going to be restricted.

The most popular model of car 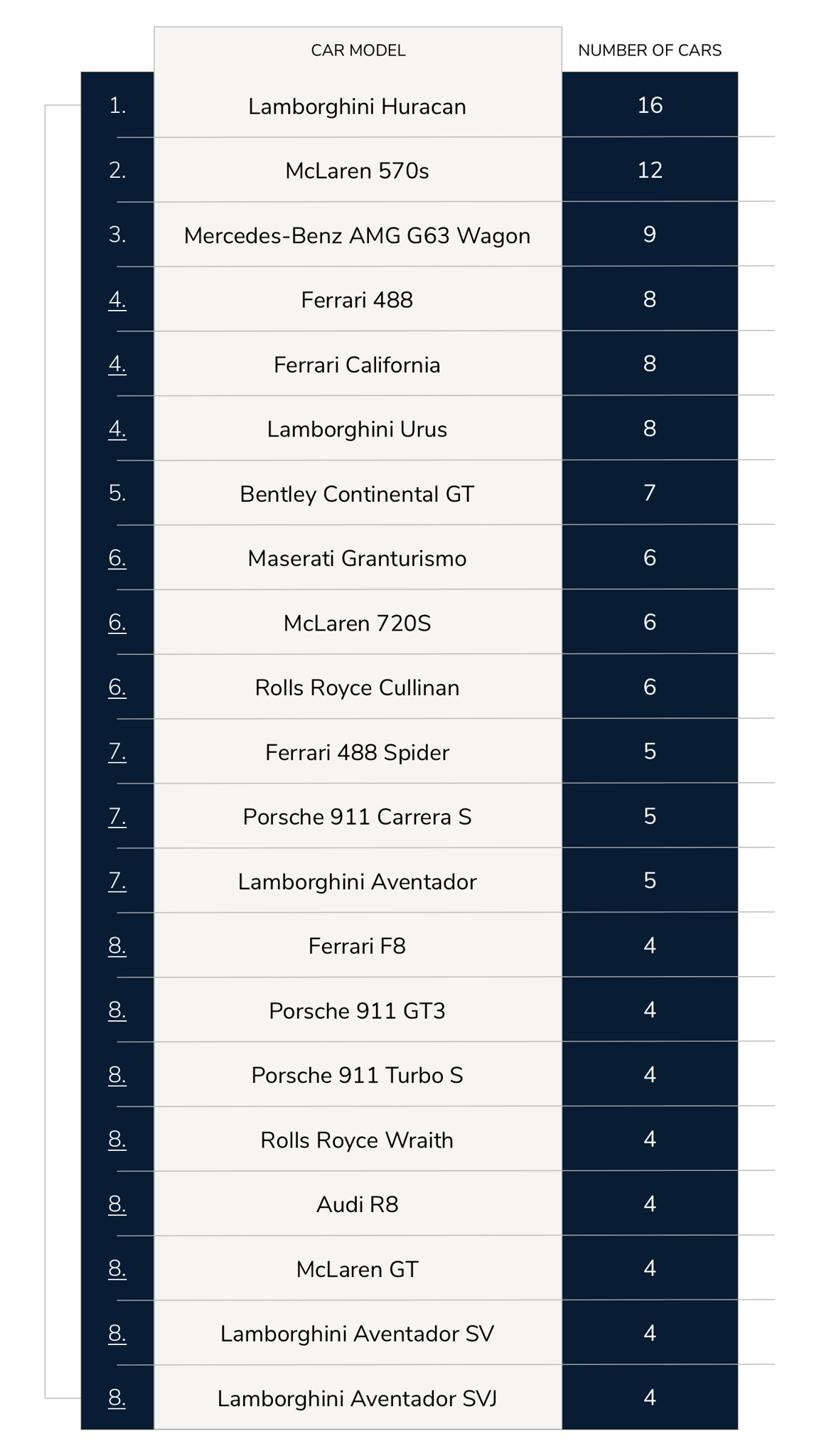 The car model that appeared the most in Daniel’s videos was the Lamborghini Huracan appearing 16 times, and with a retail price starting at nearly £200,000, that is unquestionably a luxury purchase. This exclusive model boasts the highest expression of Lamborghini’s power with state-of-the-art technology and prestige craftsmanship, the perfect show-stopper.

The popularity of the Lamborghini Huracan stayed consistent as the men’s favourite choice, however, the women interviewed preferred the brands first SUV, Urus. Another car featuring high in the list is the Ferrari 488, a mid-engine sports car powered by a 3.9-litre twin-turbocharged V8 engine.

Out of the 291 cars analysed in Daniel’s videos, only 2% were electric or hybrid with models such as Tesla 3, S and X and the BMW i8.

The most popular profession 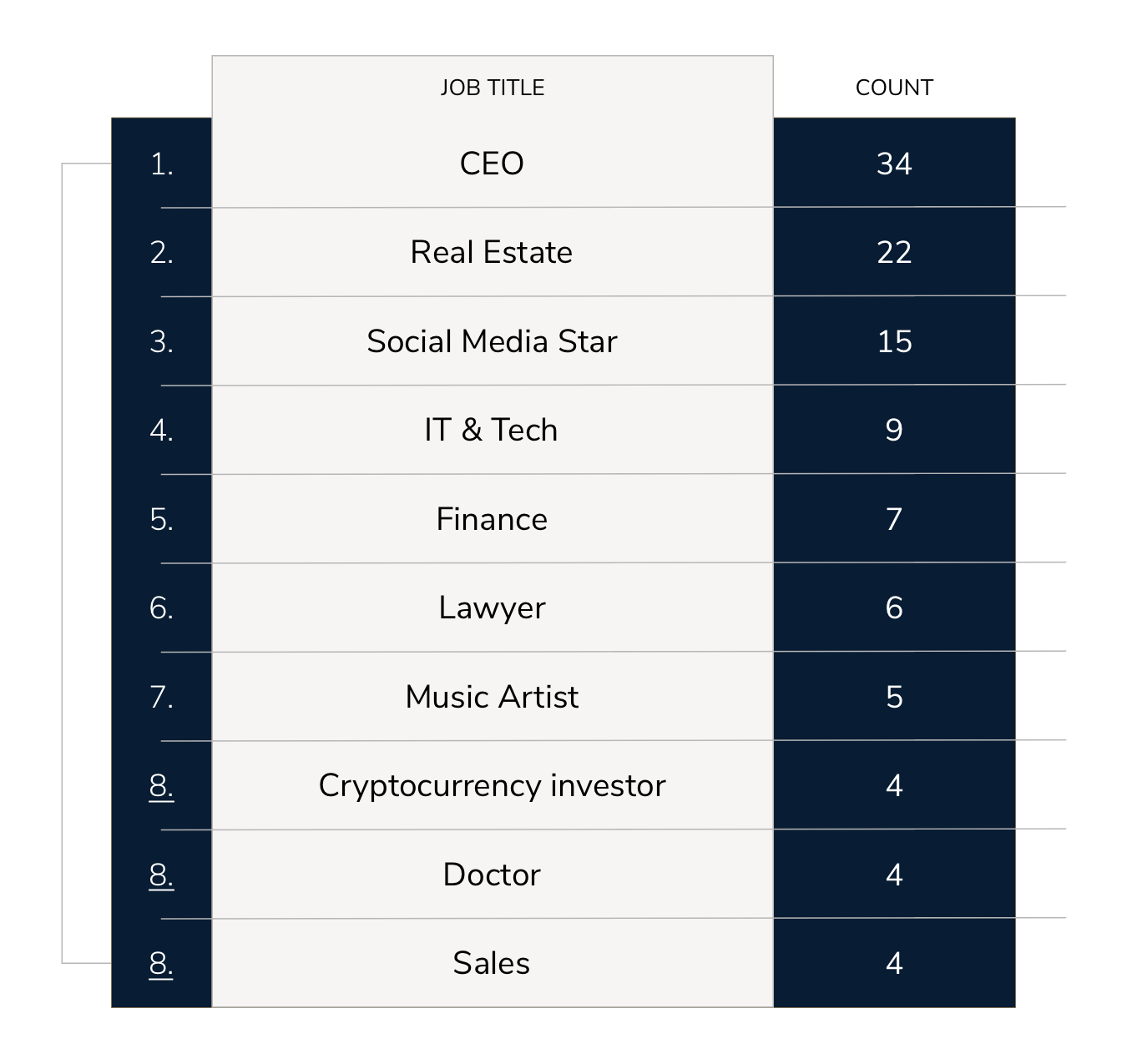 Daniel, so far, has interviewed just under 300 people in his videos, and there were certainly some professions that appeared more popular than others. Business owners/CEO’s take the top spot with 34 people making up over 10%, closely followed by real estate with 22 people. The professions of these supercar owners varied from more traditional jobs such as sales and finance to a more modern way of making money such as social media. In fact, jobs in social media including TikTok, Instagram and YouTube came in third with 15 people. This lucrative career is helping younger business-minded people to invest in luxury vehicles, perhaps an alternative modern investment to real estate or stocks.

Cryptocurrency investors are certainly cashing in from the digital world with 4 people documenting their supercar success is due to their savvy investments, owning cars such as the Lamborghini Huracan, McLaren 720S and BMW i8. While these more unique job titles are helping people to achieve their goals of owning a supercar, there are also the more traditional job titles appearing in our lists such as doctors and lawyers.

While the Lamborghini is the favourite choice for men, which profession loves to splash their cash on these exotic Italian cars? Out of all the people that Daniel spoke to owning Lamborghinis, the most popular profession was Real Estate.

Daniel has recently started adding another question to his interview where he asks if the person attended college/university which offers great insight into the link between higher education and success.

If reading about all these luxury supercars has got you inspired, you can read more about the exciting world of TikTok and cars in our blog, TikTok’s luxury cars.

All data was sourced directly from TikTok channel @itsdanielmac. Any videos containing (ad) were not counted. Data sourced on 01/02/22.