Six-cylinder in-line engines have always marked the pinnacle of luxury BMW Touring. The first K 1600 models arrived in 2010, where the GT was an agile, dynamic machine and the GTL, with its more comfortable ergonomics and standard top case, was made for luxurious riding for two people.

The K 1600 B arrived in 2016, and its lowered, long stance made it the perfect companion for a relaxed cruise. The K 1600 Grand America completed the range in 2018, by adding a stylish top box and pillion seat to the traditional ‘Bagger’ look of the K 1600 B.

Now in 2021, all these models have been revised and improved with more refinement and new technology.

The six-cylinder in-line engine has been tweaked to meet new EU-5 regulations without losing any of the character of this unique engine layout. The engine now produces its maximum power of 160 hp at 6,750 rpm, 1 000 rpm sooner than the previous engine. The peak torque at 5,250 rpm has increased from 175 Nm to 180 Nm, giving the engine even more pulling power.

The new K 1600 models are most recognisable by the re-designed front fairing and new lighting setup. BMW Motorrad has been a pioneer of rider safety for decades, and the new full LED headlight with LED lens technology illuminates the road better than ever before. There’s also a new daytime riding light that gives the bike a recognisable look when out on the road. 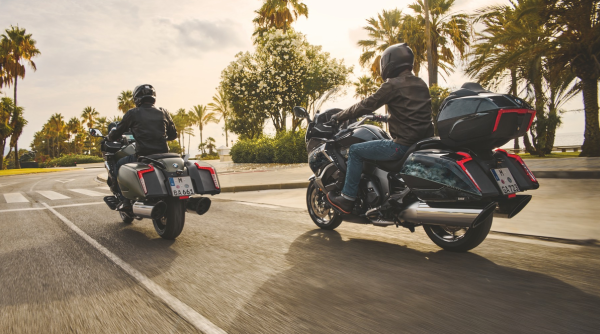 All K 1600 models come standard with the BMW Adaptive Headlight, a low-beam LED light that swivels by 2° into the curve as you lean to provide a clear look around the bend.

Another key addition to the K 1600 range is the standard fit, new 10.25 inch TFT colour display with integrated map navigation and connectivity. The industry leading display allows for a navigation map to be displayed on the instrument cluster, meaning an additional display is not required.

DAB radio or music from a smartphone can also be displayed on the screen and is controlled by the traditional Multi-Controller on the handlebars. An enhanced speaker system with more powerful amplifier gives you crisp and clear sounds when you’re enjoying a ride.

There are more standard features than ever on the new K 1600 range. Dynamic ESA electronic suspension, a Smartphone compartment with USB-C charging option, cruise control and reverse gear are just some of the standard highlights.

New K 1600 models are available in three attractive colour options: a basic variant, a style variant and Option 719. Available only on the K 1600 B and K 1600 Grand America, the new Option 719 “Midnight” is particularly exciting. The paintwork is finished in Meteoric Dust II metallic with a “Galaxy” theme depicted onto the paint using a water transfer printing method.